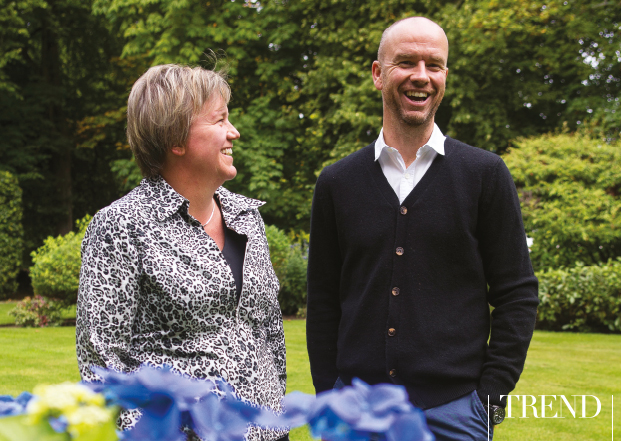 When the BBC’s coverage of the 2015 RHS Chelsea Flower Show began, the first garden to grace television screens across the country was the Brewin Dolphin Show Garden, created by landscape designer Darren Hawkes.

Darren’s garden incorporated over 40,000 handcut slates,ancient stones, floating monuments, an underground stream and a combination of wild plants and mature trees that ultimately won him a prestigious Gold Medal. Trend caught up with Darren at a recent Brewin Dolphin presentation in Aberdeen.

What inspired your design? I wanted a breakaway space, something different, but something to reflect Brewin Dolphin’s heritage. I wanted a fun, curious space but with a sense of the past, of permanence. The garden forms were inspired by prehistoric monoliths and the planting created the look of a woodland garden full of wild, fragile summertime plants.

How did you choose your materials?   I live in Cornwall. Like Aberdeen, Cornwall sits on a seam of granite and slate, so most of the elements I used are regular features of the Cornish landscape. The English Elms give a feeling of history while the floating stone platforms create a dramatic contrast to the familiar herbaceous perennials among them.

What makes the Chelsea Flower Show so special?  Chelsea is like the Glastonbury of the gardening world. It is a festival of all that’s best in horticulture. And it is a privilege to work with so many consummate professionals.

How did you get into gardening?   It came from an intense love of nature. And I have always loved the effect that an arrangement of objects within a space can have on you. My love of plants came later.

What happened to your beautiful garden after the Show?  It is sad to see the garden dismantled but Brewin Dolphin very kindly donated the plants to a respite home in Stirling run by the Eilidh Brown Memorial Fund. The structural pieces have been re-erected at Tremenheere Sculpture Garden in Penzance.

Will you have a Garden at the 2016 Show?  No. I thought of nothing else from October through May so I will focus on my clients this year. 2017? I hope so.