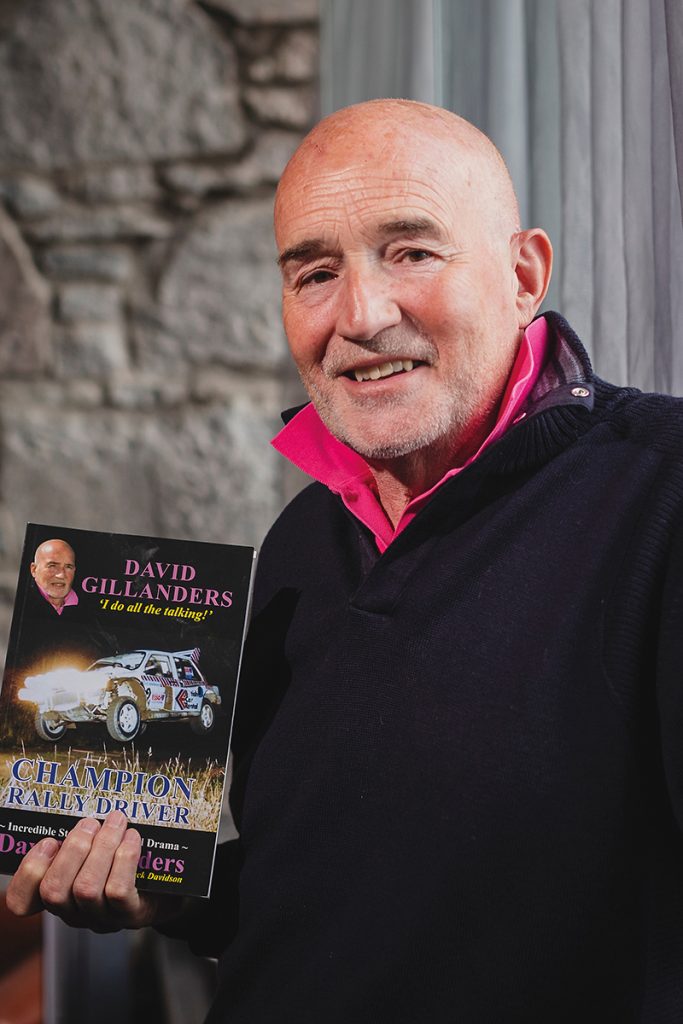 When you see on the front cover of a 350-page book chronicling the colourful life of Aberdeen’s champion rally driver David Gillanders, the words ‘I do all the talking’, you fear you may have come up against a real motormouth.

Not so. What emerged from my chat with this 69 year-old action man at his second home, the Malmaison Hotel in the city’s Queen’s Road, was a touching story of a man racing against time to ensure that Gladys, his much-loved wife of 46 years, their children, Nicole and David, and grandchildren, Finlay and Amelie, have a record of his sometimes exotic journey along the highways and byways of life.

‘I have not done this book for self-glorification,’ he said. ‘No, what has driven me has been serious concerns about my health going back to early in 2006 when I had to have a triple coronary artery bypass in Aberdeen Royal Infirmary. Since then, I have had heart attacks in 2014, 2015 and 2016 and had six stents fitted. Compiling this memoir has taken more than three years and I am so relieved it is done.’

Great tracts of the book are taken up with stories and pictures of David’s rise to fame, as one of the UK’s top rally drivers and, later, as the organiser over several years  from 1995 of offroad ventures with Land Rover at Skibo Castle, in conjunction with its owner from 1982, Peter de Savary.

However, what is remarkable about David’s swashbuckling career in motor sport is that he was born with a disabled left hand. ‘It was suggested by the medics in Aberdeen to my parents, David and Doris, that it was perhaps best to amputate the hand,’ he said, ‘but they would have none of it. Instead, they chose to drive me to London to see a specialist in Harley Street. Remember, this is 1950 and that epic journey of more than 1,000 miles there and back was accomplished in a three-wheeler Morgan sports car.

‘I had one finger amputated but whatever else the London surgeon did, for which I never cease to be thankful, I had a functioning left hand. I will always be grateful to my parents for sticking to their guns in doing what they did on my behalf.’

David’s time with de Savary also included an invitation from him to take part in amazing trip to a regatta at the luxury resort of Newport, Rhode Island. ‘I had never enjoyed the experience of racing a yacht,’ said David, ‘but it did not take me long to say yes, please.’ Once across the pond in the US, his obvious driving skills were put to good use and he became the driver of the team bus to the yacht club. However, he had to park it some way away and by the time he got to the club, his teammates were nowhere to be seen.

There was nothing for it but to go for breakfast. Behind him in the queue was a lady who had forgotten to pick up a tray for her food so the chivalrous David told her to put her breakfast on his tray and they would dine together. He had no idea who he was with until a plague of paparazzi began snapping at the dashing Scotsman in his Carnegie tartan outfit and the mystery lady.

Alas, it soon transpired she was the object of all the interest and no wonder. She was the Hollywood superstar Jane Fonda, whose husband, media mogul Ted Turner, was skipper of the yacht racing against that of Peter de Savary.

Another readable chapter of David’s book is an account of his epic trip in 2013 with his good pal Gordon Hutcheon in what was called the Monte Carlo or Bust Banger Challenge. It’s hard to believe but they somehow succeeded in completing the drive from Aberdeen and back in a 17-year-old Nissan Micra.

David is determined to keep going flat out with his life and surprise, surprise, he ends the book, available on eBay,  by saying he will still do all the talking. Enough said!