George Burnett’s love of squash inspired him to have a go at opening a sports shop in Aberdeen more than 30 years ago and today, the proud 67-year-old Torry loon  is still playing the game at the city’s squash racquets club at Mannofield where he has twice been club captain. What’s more, he is also celebrating 25 years in his shop, Thistle Sports, in Rose Street.

‘What clinched it for me to turn my grocer’s shop in South Mount Street into my first sports shop, was the revolution in squash with the advent of graphite racquets,’ says George. ‘It made an unbelievable difference to my game and I started to beat players I had never beaten before.’

Pardon the pun, but he then added a vital string to his bow by starting a racquet restringing and regripping service which has given him a distinct edge in the harsh competitive world of retail sports outlets. Out of sight of customers is a £6,000 Wilson Biardo machine which one of his young assistants, tennis champ Alan Ross, was operating during my chat in the back shop. Also on duty was George’s stepson Grant Skene. 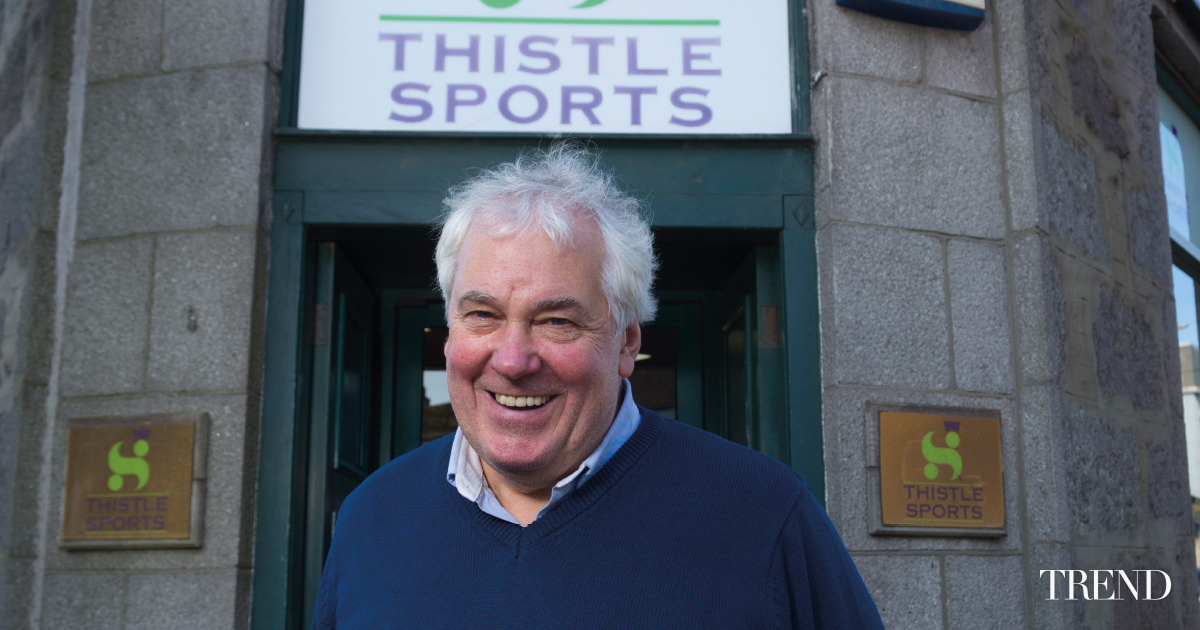 ‘One of my proudest moments outside of the shop,’ George adds, ‘was to bring Pakistan’s then world squash champion, Jahangir Khan, to the squash club at Inverurie in the 1980s. He had been unbeaten for six years and wowed a big crowd with an exhibition of his skills and a willingness to play against up-and-coming local players. Staging the event cost me £3,000 but it was worth every penny and we did manage to break even.’

Prior to his shop venture, George acknowledges a huge debt to those who trained him to be a field sales representative for Aberdeen Journals which he joined in 1976. ‘I was given a territory in the city’s Holburn Street, Union Street and Market Street and I revelled in that job so much that my selling success earned me the use of a new company car, not a hand-me-down from the senior reps.’ Not such a success was his promotion to tele ads trainer and George took his leave of the company after six years.

Apart from racquet sports, George says his core business includes supplying rugby, swimming and hockey gear. ‘Hockey has been a massive growth area,’ he adds, ‘and people can now pay up to £300 for a top-class stick.’

So what of the future? Is George about to hang up his boots?  ‘It’s true to say I am not full-time any more,’ he says, ‘but I still get as big a buzz from the sports trade as I did when I started. I have also been very privileged to have had a ringside seat at major sporting events such as Wimbledon, not bad for a lad who hated school and left at 15. Whatever happens, my goal will never change which is to keep Thistle Sports as the best independent sports shop in Aberdeen and the North-east.

‘And, by the way, I don’t like to brag but some years ago, we did restringing for Andy Murray when the young tennis knight was in Aberdeen for a Scotland-England international.’ Game, set and match to kingmaker George!