The students have lined up seven internationally-themed cultural events at venues in the city, which will showcase local talent – and raise funds for two charities Erskine and Diabetes (UK).

Organisers of the 2017 festival will be hoping to follow on from the success of last year’s inaugural festival which won Student Event of the Year 2016 at the Scottish Event Awards and an E-Award for Student Festival Excellence at the EventIt Awards.

Rachael Ironside, lecturer in Events Management at RGU’s School of Creative and Cultural, said organising the festival employs all of the practical skills which students develop during their course. 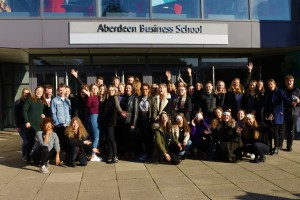 “Aberdeen has an increasingly rich festival programme which grows year on year. This is an important addition to that calendar and our students have shown great initiative in developing a student festival which will follow on from the success of last year’s event while putting together a programme of completely new events.

“The events are open to everyone and I hope people will give the festival their support and enjoy the activities on offer while supporting two great charities which do so much to support the local community.”

Starting things off on Friday evening, festival-goers will have a choice of two events. Inspired by the famous Liverpool venue, the Cavern Club at Underdog will celebrate British music culture and discover some local up and coming talent with some great prizes up for grabs during the evening.

Or you can limbo the night away at a Wiki Wiki Luau at Exodus Nightclub. Celebrate all things Hawaiian with competitive team games including a quiz, tropical bowling, a flip flop toss and a Hula off.

Saturday evening will have two events, Murder at the Masquerade, a Venetian night to die for with murder, intrigue and backstabbing fuelled by a two course meal at the Copthorne Hotel and a Night at the Moulin Rouge at Exodus with dancers, performers, themed drink and food all in a setting echoing the infamous red mill.

On Sunday the festival will take you to South America and its Latin culture of food, music and dance during Salsa Sunday at the Copthorne Hotel. Enjoy the show or grab a partner and take a dance session led by a Latino instructor.

Closing the festival will be a celebration of what Aberdeen has to offer. Delve into the Deen and experience local culture and arts with local musicians and artists, a pop up gallery, drinks and some locally flavoured appetisers.