Gordon Thomson is a big Aberdeen rugby man, all 6ft 7in of him – and he’s a man with a mission. BT is pumping megabucks into a Scottish Rugby Union club and academy structure designed to nurture home-grown talent from the age of 14 and produce top players for club and country.

‘This is a plea from the heart,’ says Gordon, the chairman and honorary secretary of Aberdeen Grammar Rugby. ‘I would like the whole rugby community of the North-east to pull together to make this initiative work.

‘In a nutshell I am trying to get across the need for our clubs to develop business plans and coaching structures to harness the increase in SRU academy players.  The BT sponsorship will allow better players to remain in our district (Caledonia), rather than being sucked into Edinburgh and Glasgow as happens now.

‘The public in Aberdeen and the north are avid supporters of Scotland’s national team, but they need to think of where these players originate from.’

Gordon, whose playing career embraced Grampian Police, Aberdeenshire and Grammar FPs, is passionate in his belief in the merits of rugby. He says, ‘Young people learn leadership, enjoyment, achievement, engagement and respect from playing the game. As well as developing physically they mature in an environment that is inclusive and stimulating’.

And he points to the fact that more than 1,000 young people in the Aberdeen area are learning the game and crucial life skills at clubs such as Mackie, Deeside, Garioch, Ellon, Aberdeen Wanderers and Aberdeen Grammar.

‘Our clubs require to work together to raise standards and improve facilities so that Caledonia can continue to produce rugby athletes who are capable of representing their country’, Gordon adds. ‘Every Saturday and Sunday games are hosted throughout the area and the players would enjoy greater support, both vocally and financially, from the public, business and local government.’

Could it all lead to Scotland having Aberdeen as the country’s third professional team?

‘Yes indeed’, says Gordon, ‘but we need the community to support the clubs and show major funders, local authorities, big employers and the SRU that we can produce a top-class Aberdeen side’.

Now, does anyone have £10 million to spare? 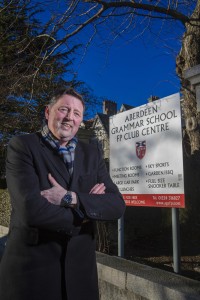