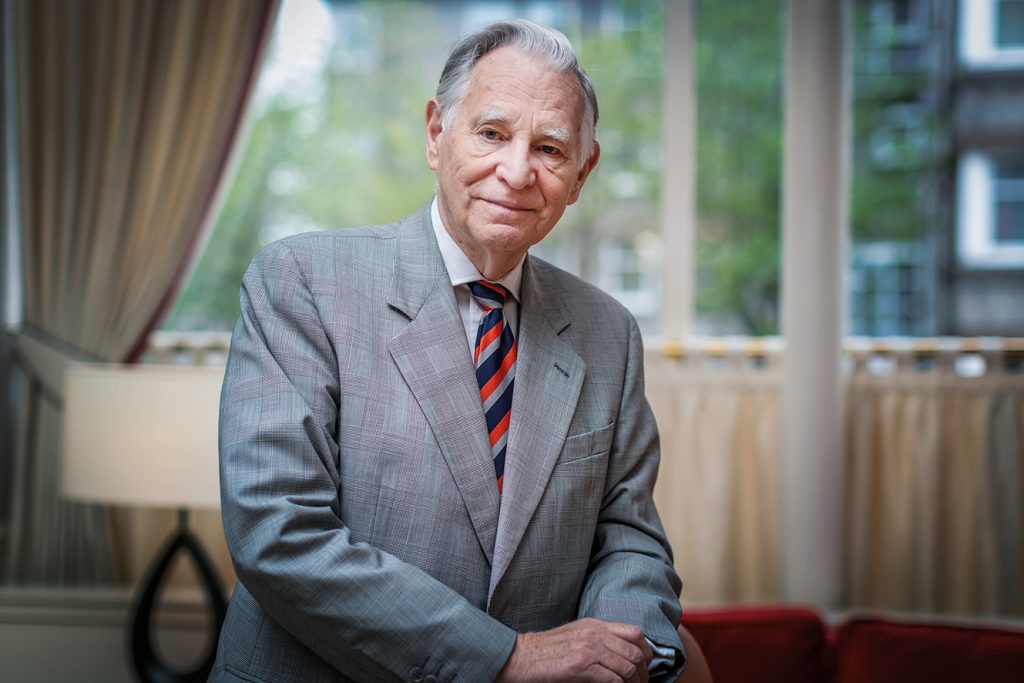 When you sit down for a chat with Aberdeen’s visionary entrepreneur, Charles Skene, you simply cannot believe that the former wedding photographer turned 84 at the end of April. While other men of the same vintage may struggle to walk the dog, he is full on at the helm of the Skene House brand of hotels, serviced apartments and flats, all under one roof in three different locations in the city, Rosemount, Whitehall and Holburn.

Our get-together is ostensibly to celebrate 40 years of offering guests an unrivalled choice of city-centre accommodation for what could be one night or one year. However, it’s no secret that the hospitality sector in the North-east is currently riding out the storm of a severe downturn and Skene House is no exception. If we stay off the subject of what Charles calls the ‘punitive’ rates revaluation of 2017, then we can
focus on a true success story.

We meet at the Skene House on Rosemount Viaduct but only after I have been amazed to be able to park at the back of the building in an area accessed down a narrow entrance off Baker Street. What a hidden treasure that is in the middle of a city and, yes, it’s strictly private.

Charles is in no doubt as to what has seen the Skene House concept flourish. ‘We are especially fortunate to have brought on a team of home-grown hospitality professionals,’ he says. ‘Our policy is to promote from within, where possible, and our current management team comprises talented individuals who started their
careers with us as a housemaid, a laundry driver, a student on placement, and, more recently, a receptionist.

‘This team has been nurtured under our general manager who joined us nearly 20 years ago, following a career in country house hotels.’

Charles believes a successful operation can be measured in the amount of repeat business Skene enjoys. ‘Many guests have stayed with us weekly,’ he adds, ‘and at Holburn we have had regulars staying with us midweek for 20 years.’

Perhaps less well known in the Skene portfolio is a development begun on part of Inchmarlo estate, near Banchory, which Charles acquired in the 1980s. ‘On a trip to the US, I was made aware of the concept of continuing care and I believe we were among the first in the UK to embrace it,’ he says. ‘Now, there are nearly 200 houses and flats there and if the need arises, there is a care home at the top of the hill.’

Charles has enjoyed diverse roles and activities outside of work, including Junior Chamber Aberdeen, a long stint as a visiting professor of entrepreneurship at Robert Gordon University, and generous sponsorship of an award for outstanding young musicians at the international festival of youth orchestras in Aberdeen which ran from 1976 to 1999.

Little wonder he is also a patron of the North East of Scotland Music School, based in the city’s Huntly Street, and indeed took singing lessons there. ‘One of my happiest memories of my time as a boarder at Loretto School in Musselburgh was singing in the chapel twice on a Sunday,’ he says.

He also played the bass drum in a brass band while doing his National Service in the Royal Navy but not, of course on the high seas. No, it was during his training at HMS Ceres in Yorkshire.

So what is the message from someone who has enjoyed fine dining on land and sea all over the world with his wife, Alison, has heard Paul Robeson sing at the Music Hall in Aberdeen, and has been a guest of Prime ministers Margaret Thatcher and John Major at 10 Downing Street? ‘Be a dreamer who does,’ he says, before dashing off to his Rotary Club lunch. For an hour or so, he can forget that, in his book, revaluation has led to devaluation of all he has worked for.