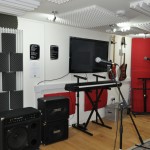 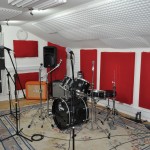 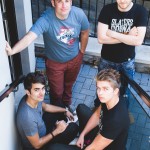 For many bands, half the struggle of getting that all important first record out is securing recording time in a proper studio, but that’s one challenge Aberdeen-based band Ruptured Ducklings don’t face. The band’s rhythm guitarist Calum Farquhar and bassist and vocalist Jonny Lees teamed up to open their own recording studio. This gives them all the time in the world to get their sound just right.

The duo originally met while studying music at Aberdeen College, after Jonny took up playing the bass guitar his brother had discarded. Deciding to give vocals a go as well, Jonny and Calum formed the memorably named Ruptured Ducklings back in 2012. They’ve been playing venues across the city with fellow band members Mike Love on lead guitar and Allan Constable on drums ever since.

The idea of producing music really appealed to Jonny and the pair pursued the idea of a recording studio. They took over the upper floor of a brand new garage built by his family and transformed it into state-of-the-art studio. This month D-Range marks its first year in business.

‘Initially people were mainly coming in to use the studio to practise,’ said Jonny. ‘But as the year has gone on we have had more bands coming in to record such as Franklin, Cavalcades and Underage Disco. I never imagined it would take off like this.’

As well as sharing their impressive set-up of kit with other city bands, Calum and Jonny have been organising karaoke parties for those keen to give vocals a try themselves.

With an eagerly anticipated EP containing three tracks recorded in the studio and two live tracks on the way, Jonny is in no doubt that the studio has been a massive asset to the band.