Aberdeen’s Art Gallery has spent over a year under a shroud of scaffolding and wraps while undergoing a transformation that will see a reborn gallery open in November 2017.

The new gallery will feature 21 exhibition spaces and we’re promised that we’ll have one of the best regional galleries in the world, showcasing some of city’s best known paintings and providing a new space for music.

During the early stages of the refurbishment project, almost a hundred skeletons were found during an archaeological exploration of the site, which was home of a Dominican friary of the Black Friars, still commemorated in the name of a pub on the Castlegate. Some of the remains will be reconstructed and displayed in the new gallery as part of a display showing aspects of life in medieval Aberdeen.

Two thirds of the £30 million needed for refurbishment have been provided by the Council and the Heritage Lottery Fund, in addition to a £250,000 grant from the Garfield Weston Foundation. The people of Aberdeen will be invited to contribute the remainder via a massive fundraising campaign, which will see donors digitally acknowledged and the names of those donating in excess of £2,500 etched into the glass of the new balcony. 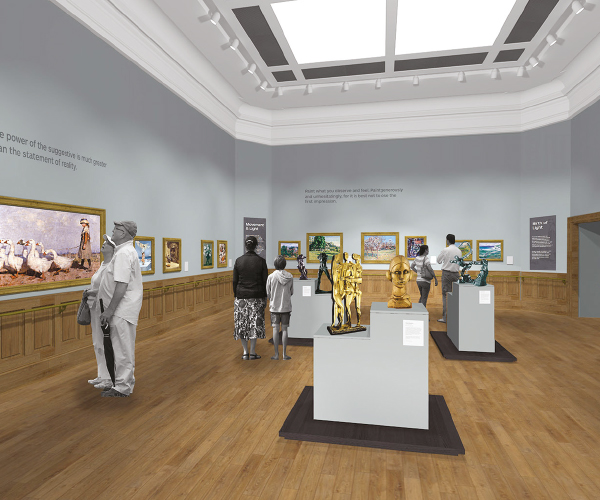 Even though the gallery is closed, it is still possible to view some of the works at Drum Castle, just ten miles away and at the city’s new Collections Centre in Northfield, where some of the 180,000 art and museum artefacts will be held and displayed. The new gallery and Collections Centre are at the heart of the council’s hopes to bring art and culture to a wider spectrum of the people, allowing more works to be seen and studied.