Paul Ritchie’s heart may be in Collieston, where the wild Buchan coastline and ever-changing seascape provides artistic inspiration, but his journey through life has seen him exhibit at the Royal Academy, run a handmade watercolour paper company and even smoke herrings in his gallery space! We found out more…

‘My family were originally fishermen from Collieston and when I returned to Scotland in 2000, I decided to reinvent myself as a painter. I had studied fine art and advanced print making, before working at Peacock Printers in Aberdeen. I set up the Manchester Etching Workshop before running the Two Rivers Paper Company, which produced hand-made paper for artists,’Paul began.

‘My work is very much concerned with atmosphere, evoked using tone and texture. The rugged Buchan coast lends itself wonderfully to of this way of working. My work starts with outdoor sketches, which I use as an aide memoir, rather than pure reference.

‘Recently I have been working on small studies of pears using innovative hybrid printing techniques to render a greater range of tones and textures, as well as larger than life, still life paintings. I don’t know if the big paintings will work, but I’m hoping the unconventional pairing of subject and scale might show still life in a different light.

‘I don’t normally work to commission, as I open my studio during NEOS in September and I will be showing at ArtAboyne in the summer. I’ve also had two of my works shortlisted for this year’s Summer Exhibition at the Royal Academy and have had work shown there 13 times before.

‘My work is in many public and private collections and can also be seen by appointment at my studio in Collieston in the Smokehouse Gallery. It’s closed during July and August as it doubles as a smoking shed where I kipper herrings that I catch in the summer!’ 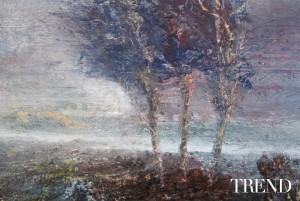