From fluffing the bride’s train and holding her flowers, to organising elaborate hen parties and attending numerous dress fittings, the role of a bridesmaid is not for the faint hearted.

A time honoured tradition dating back to the Roman Age, the original role of the bridesmaid was to protect virginal brides from potential kidnappers and, perhaps more ominously, vengeful spirits.

Whilst today’s maids have less constabulary duties, they can bear the burden of bridal expectations that can push even the closest of brides and maids apart during the nuptial arrangements.

The honour of being a bridesmaid is a wonderful feeling and is, for the most part, a rewarding experience, but there’s nothing like a wedding to bring out the bridezilla in the best of us. Many a maid can find herself gritting her teeth as her bridezilla bestie commands yet another task of her on top of an already time-consuming list of jobs.

And on the wedding day itself, it’s not all sitting around in hair curlers drinking prosecco and getting your make up done. You’ll more likely find yourself running around making sure the groom doesn’t see the bride before the ceremony, gathering wayward guests for photos, and helping the bride to the toilet when her gown proves too restrictive to go herself. It’s tough work, but some maids have to do it.

If you’re a bride about to make that all important bridesmaid ask, think carefully about what you’ll expect your bridesmaids to help with, and be upfront with them about it so there are no last minute surprises – and potential bridal fallouts!

Prospective bridesmaids would likewise do well to be upfront about their own limitations of what they can or are willing to do. Wrestling with a bridal gown in a toilet may well be all in a wedding day’s work for some bridesmaids, but make sure you’re up for the task before saying yes to the bridesmaid dress! 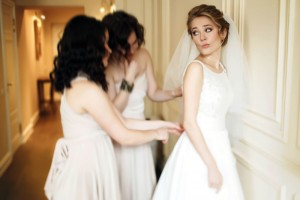