We’ve all been there. Whether it’s teenage angst because the love of your life likes someone else, or the awkwardness of realising that you prefer your loved one’s absence to their presence. It’s the realisation that Tammy Wynette had it all wrong and that rather than standing by your man, you want to crush him with a steamroller. 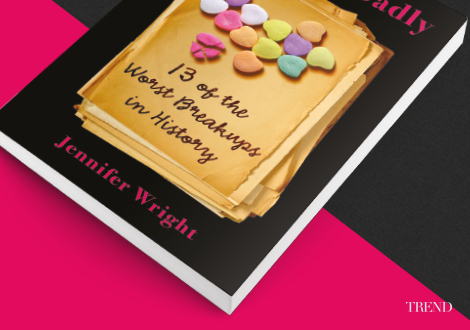 Whatever you’ve been through, it’s nothing like the historical breakups featured in Jennifer Wright’s It Ended Badly. It’s a beguiling trawl through the breakups of some of history’s most gloriously unhinged lovers. Pity poor Poppea, humiliated by Nero who replaced her with his favourite eunuch who he dressed in her clothes. Socially awkward, particularly if the eunuch looked better in the dress than she did. Eleanor of Aquitaine stars in a Dynasty-esque tale of what happens when an overachieving first wife gets thrown over for a sweet-natured unchallenging mistress. Gathering her sons to her side, she literally started a war with her errant husband.

Lesser known lovers also shine, like Timothy Dexter, an idiot who somehow became immensely wealthy, then went around telling everyone his wife was dead, advertising his estates for sale so he could rid himself of the ghost. Divorce might have been simpler, but this was a bloke who once gave a speech in French to an English speaking audience, despite not speaking any French.

Perfect reading whether you’re going through a break up or in a happy relationship. For a start, it’ll keep your beloved on their toes should you leave it on the sofa! Available to order from bookshops or available on Amazon for £13.48.