From a specially blended green foundation by Mac to hand dyed sequins, it’s the exquisitely crafted details of Wicked that makes it into such a splendid overall experience.

he story follows the friendship between Elphaba, the Wicked Witch of the West and Glinda the Good leading up to and including the arrival of Dorothy from Kansas, and is taken from a book by acclaimed American author Gregory Maguire which reimagines the world of Oz.

The show is full-on visual and auditory delight, with an array of elaborate costumes worn by every member of the cast which look to have taken inspiration from the same dressing up box as Tim Burton. The winged monkeys are particularly arresting as they fly around to the bidding of the Wizard of Oz played by Stephen Pinder, who once upon a time was Max in Brookside!

The title role is played by Ashleigh Gray, who is delighted to return to her native Scotland with this incredibly successful UK tour. She and fellow witch Emily Tierney make a great effort to stay healthy with juices and smoothies for what are two truly demanding roles. Both actresses are on stage for the vast majority of the two and a half hour show, which includes quite a bit of swinging from the rafters as well as several big musical numbers. The remaining principal part of Fiyero is played by Samuel Edwards, admirably filling the role of a handsome posh boy who doesn’t play by the rules.

The production is unusual in that it has not been downscaled from the original West End show, this
is often necessary as a result of budget or space constraints for touring productions, but the Company Manager is rightly proud of the fact that this is not the case with Wicked.

The music and lyrics are written by Stephen Schwartz and the score is full of musical numbers which are both engaging and original, not least due to the presence of a live mini-orchestra and some extremely accomplished vocals.
The show comes to Aberdeen from 5th to 30th May, and runs Monday to Saturday with two matinees a week. You’ll be green with envy if you miss it! 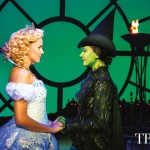 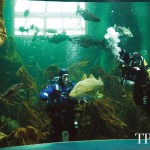