It can be unnerving reviewing a new restaurant in its formative weeks. It takes time to shake down and run smoothly front of house and for the kitchen team to operate as a well-oiled machine. I’m glad to report that, based on my visit, the Urban Bar & Grill at the Village Urban Resort in Kingswells has made a promising start.

Our teenage son chose the Nachos to start. This was a generous portion, big enough to share – though not in his opinion – topped with cheese, sour cream and salsa. My husband was impressed by the Calamari, which arrived with a suitably unctuous garlicky aioli and the Chicken Tenders were succulent and well paired with a BBQ dip.

For our main courses, I opted for silky mash-topped Fish Pie served with the veg of the day. This was more literally interpreted than I’d have liked, being accompanied by some freshly steamed broccoli. I was a wee bit envious of the Fish and Chips – a skin-on fish fillet encased in a light, crispy beer batter, accompanied by mushy peas, tartar sauce and fries. Our son reported that the Cheese and Bacon Burger with salad and fries was ‘all right’ – equivalent to an 8 out of 10 ranking on the teenage gourmet scale.

The industrial gunmetal backdrop and attentive, but never obtrusive, service make for a relaxed atmosphere, with time to catch up on conversation between courses and a bottle of a voluptuous Californian Gnarly Head Pinot Noir provided a fruity robust counterpoint to the food. 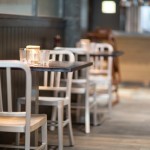