Books make a thoughtful Christmas gift, especially since a National Literary Trust survey last year suggested that over 750,000 UK schoolchildren do not have a single book of their own. Boys and teenagers were especially likely not to own books, which can leave them four times as likely to lag behind their peers when it comes to reading.

Books o er lifelong joy and fascination, so it’s important to find a title to engage each individual child, whether they are six months old or sixteen.

Sometimes old favourites are still popular. Paddington has recently enjoyed a resurgence, thanks to two lm versions and Michael Bond’s tales of the little bear from Darkest Peru should appeal to those aged 4-7. There’s a box set of the complete Adventures of Paddington coming out in November to celebrate sixty years since his trip to join the Brown family. Make a family weekend of it by watching the films and munching on marmalade sandwiches.

In other cases, the stories your parents read to you, or you read in your own childhood remain very much of their own time. Today’s children would be perplexed by The Famous Five going camping by themselves, let alone a desire to eat hard boiled eggs and lashings of ginger beer. Even amongst the youngest readers, Noddy has been replaced by The Dinosaur Who Pooped A Princess.

Reluctant readers can often be encouraged if books are funny or illustrated well. David Walliams dominates the children’s best seller lists and is a safe bet, as are Jacqueline Wilson, J.K. Rowling, Tom Gates and Rick Riordan.

Teenagers who enjoy online games such as World of Warcraft or have graduated from Hogwarts will also enjoy Scott Lynch’s Locke Lamora series or Joe Abercrombie’s the First Law novels. Like George R.R. Martin’s A Game of Thrones epics, they are primarily aimed at adults, but can cross over for readers of thirteen and upwards. Ursula K. Le Guin’s marvellous EarthSea series is also being re-issued in November in a special illustrated edition that would make a good gift.

If you’re not sure where to start, head to your local library for ideas or your nearest bookshop’s kids’ section. Whichever you choose, the staff are all passionate about getting everyone reading. 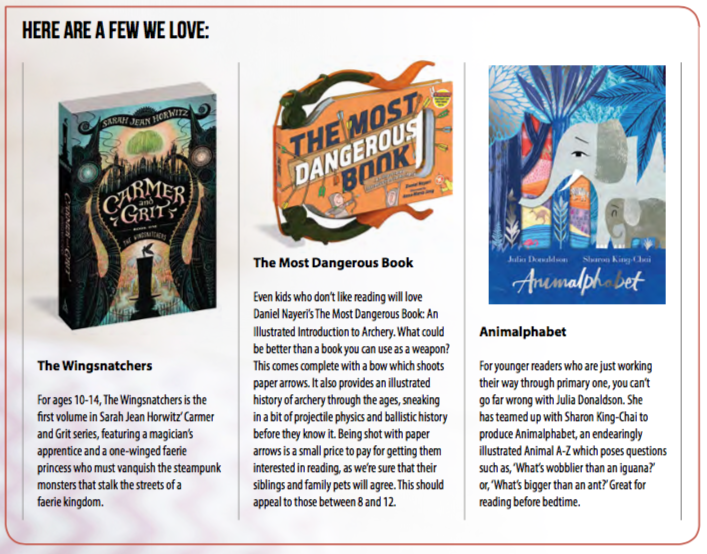