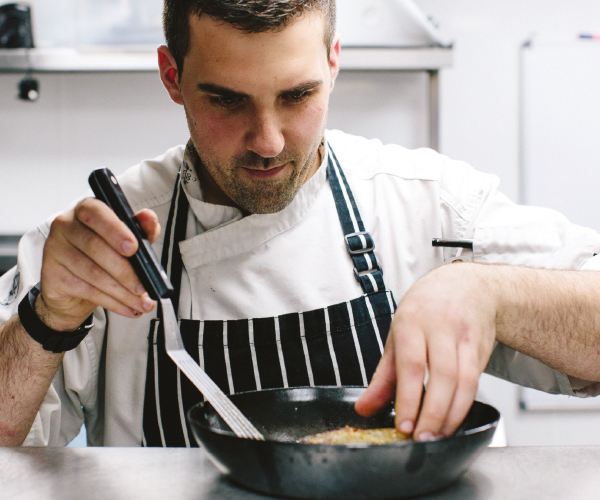 ‘I grew up in Applecross. The peninsula is pretty remote on the coast in the North West Highlands, so moving to Aberdeen to do a catering course at 15 was a bit of a change!  As a teenager, I helped out in the Applecross Inn, which is famous for its freshly caught seafood, graduating from washing up to being part of the kitchen team.

‘Over the next fifteen years, I worked in many of the best kitchens in Aberdeen and beyond and met my wife, Mary, along the way. We have a five year old son called Andrew and a daughter Ella, who managed to time her entry into the world just as we launched No. 10 Bar & Restaurant, so I didn’t get much sleep that week!

‘No.10 has proved very popular since it opened, and I think that is down to our menu which is based on classic cooking with a twist. It’s relaxed and contemporary and we make use of the best local and Scottish produce with some more eclectic dishes to keep our customers interested. I am also influenced by seasonal produce and I like to build good relationships with my suppliers so I can get the very best ingredients for our new menus and daily specials – I phone our fish supplier almost every night to see what’s expected in.

‘After a busy shift in the kitchen, I’ll sometimes have a steak pie from the baker inside a softie with lots of sauce! Probably best if you don’t tell my wife, though!’ 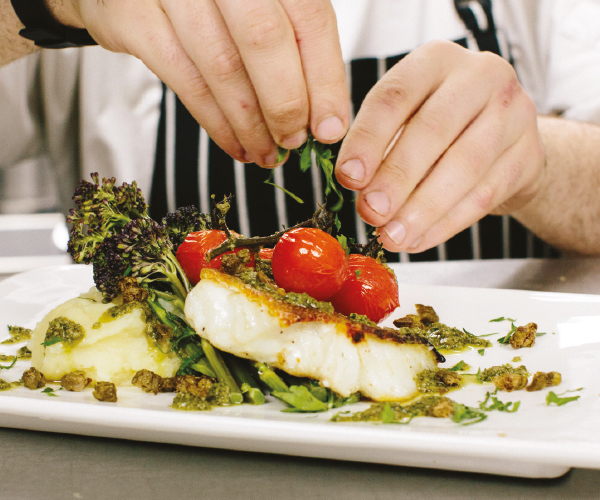 Method for Salsa verde  |  Blend all the ingredients in a food processer where possible (if not finely chop) apart from the olive oil. Once it has formed a puree, add the olive oil gradually to form a smooth paste and serve with fish.

Heat a frying pan with two tablespoons of oil and, when hot, place cod in the pan skin side down and fry for two minutes each side and then place on oven tray alongside vine tomatoes and place in oven at 180oC for 5 minutes. Drain and mash potatoes with 100g butter and season, blanche the purple broccoli, season and drizzle with remaining melted butter. Remove cod and tomatoes from oven and serve.