If you’re looking for a short city break, then, until recently, Belfast probably wouldn’t have been the first place to come to mind.

Sectarianism and miserable, shouty politicians don’t pull in the tourists. Luckily, Belfast has  undergone a cultural transformation since the Peace Agreement and is now an optimistic, vibrant and welcoming city, surrounded by lush green countryside, natural wonders and some superb golf courses. It may not have Amsterdam’s wealth of art galleries and laid-back vibe, nor Paris’s high-end design districts and superficial romanticism, but Belfast offers some great hotels, amazing restaurants and interesting attractions. 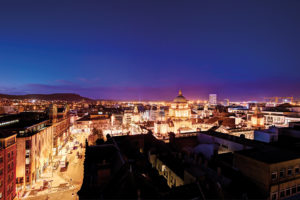 There are direct flights from Aberdeen International Airport to Belfast City, or, if you’re in the mood for a road trip, you can drive down to Cairnryan, then take a ferry across to either Belfast or Larne. This can be more expensive than flying, but saves hiring a car if you intend exploring beyond the city.

Many of the visitor attractions focus on the city’s past, with Crumlin Road Gaol now offering tours. Several of the guides are ex-prison warders, who tell entertaining and informative tales of suffragettes, executions, and the segregation of republican and loyalist prisoners. The gaol has a good coffee shop and restaurant, hosts live music and, in that darkly humorous Belfast fashion, you can even get married in prison.

The Titanic Quarter has revitalised much of the city’s waterfront, with the Titanic Museum as its centrepiece. The displays include a lot of material on Belfast life in the period the ship was built and you can also explore the SS Nomadic, a smaller Harland and Wolff built ship moored outside. 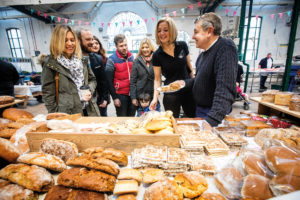 St. George’s Market is a covered Victorian market now given over to food, antiques and crafts with lots of stalls providing on-the-go snacking. You’ll find everything from fish, game in season and cheeses, to hand-made jewellery, upcycled furniture, painting and sculpture. It’s open on Friday, Saturday and Sunday and local musicians add to the atmosphere.

Belfast Zoo is home to around 130 mostly endangered species, many of whom seem to have been selected for the comedy value of their names. The Pancake Tortoise, Eastern Bongo, Tawny Frogmouth, Red Titi, Superb Starling and Southern Screamer all sound like characters from Roald Dahl. That said, the Miniature Donkeys are so cute, you’ll want to bring one home. 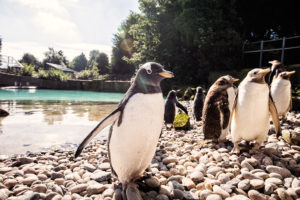 The city’s Botanic Gardens are perfect for a lazy meander amongst the planting in the palm house or in the surrounding parkland, though the Tropical Ravine is currently undergoing a rebuilding project.

When it comes to food, Belfast is a carnivore’s delight, with many menus drawing heavily on locally produced bacon, ham, beef and potatoes. Try Edo, which, like many of the city’s best restaurants, features salt-aged beef and other meats from Peter Hannan. Holohan’s Pantry, The Muddler’s Club and Ginger Bistro are all highly rated, as are the city’s many Chinese and Indian restaurants.

If you fancy a day trip, then try a walk up to Hare’s Gap in the Mountains of Mourne, followed by a stroll along Newcastle Beach. Or visit the Giant’s Causeway, then muster a bit of Dutch courage at Bushmills Distillery before taking the Carrick-a-Rede Coastal Walk and traversing the Rope Bridge. 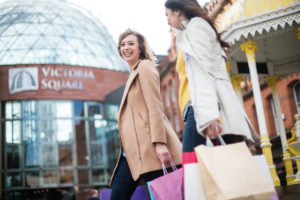 If you don’t fancy tackling quite so many stairs, then the Cultra Folk Museum offers an interesting step back into history. It’s pretty much like a live action version of a Victorian farm, with locals in period costume, demonstrations of traditional crafts, horse drawn carriages and old-fashioned shops. For modern shopping, Victoria Square and the Castle Court Centre offer plenty of choice.