If you need a few days in the sun, but want rather more than a beach break and an endless supply of watered down cocktails, you could make a worse choice than Marrakech.

The combination of  dusty sunbaked walls, a bewildering maze of market stalls and Moroccan cuisine give the city a timeless air of exotic intrigue. It’s easy to get lost, so abandon the idea of a must-see daily schedule and just rejoice in the pleasure of new discoveries. 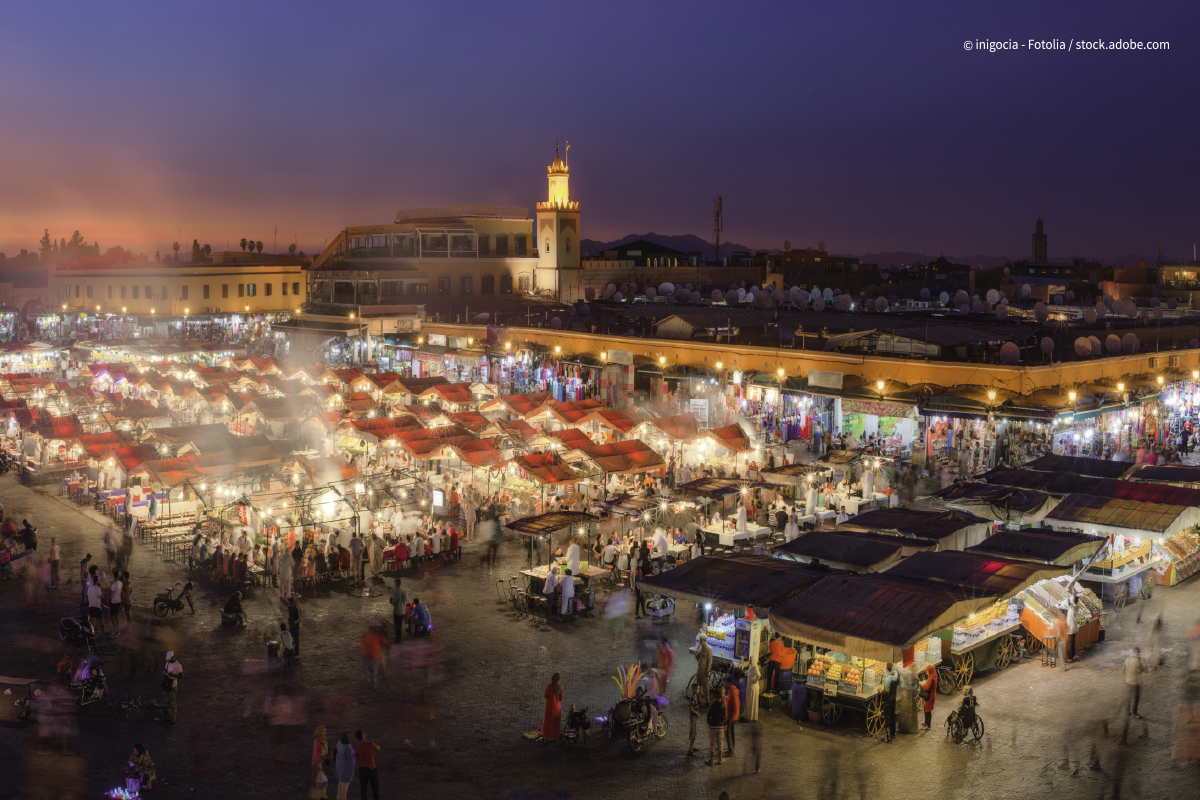 There’s plenty to do if you want to explore the city and its surroundings. Start with the Bahia Palace, where Bou Ahmed, a slave who worked his way up to Grand Vizier lived with all four of his wives and two dozen concubines. Frankly, it’s amazing that he found the time to rule the country and build such a magnificently decorated building. The rich harem suites boast stained glass, silk hangings and painted ceilings, while the grand courtyard offers a cool respite from the late morning heat.

Although children are always welcomed, the city may be more suitable for a trip for two, or a girly weekend as traffic is undisciplined and the press of the crowd can make it easy to get separated.

Keen shoppers won’t be disappointed. As well as typical modern designer labels in the city’s shopping thoroughfares, the souq teems with possibilities and opportunities for a little haggling. Leather goods, spices and local handicrafts are popular buys, though if you don’t like being pestered, the pleasures of the souq can soon give way to feeling harassed.

In the evening, head for Djemaa el-Fna, the city’s main square which is a UNESCO World Heritage site. It’s like the stories of Arabian Nights brought to life, with musicians, performers and snake charmers, outdoor restaurants, henna tattoo artists, acrobats and slapstick performers all hoping for a few coins.  Unfortunately, there are still a few animal acts with trained monkeys and pickpockets working the crowds. In January and February, the temperature rarely falls below 17oC, but the nights can be unexpectedly chilly, at around 5oC, so a jacket is advisable.

There are also plenty of day trips to choose from, from touristy camel rides to sunrise hot air balloon flights over the Atlas Mountains. You can also opt for longer trips which will take you to explore desert settlements and traditional ways of life. If you’d rather spend your time in the kitchen, then there are plenty of cookery classes to choose from. Try La Maison Arabe or Faim des Epices for an unforgettable lesson.

If the sights and smells of the city start to feel overwhelming, then restore your equilibrium in the manicured greenery of the Jardin Majorelle. It’s best to go early before the recently restored gardens and Berber Museum get crowded. Another relaxing alternative is a visit to one of the city’s many spas and traditional hammams, where you can emerge feeling like a new person after bathing and a vigorous massage. The Heritage Spa, Hammam Rosa Bonheur and Les Bains des Orients are all well regarded.

For accommodation, the best option is one of the many small independent riads, which offer a more romantic and exclusive feel than anything by Best Western, and often come with five star ratings on Tripadvisor and other travel websites. Many have their own spas and restaurants if you want more than a base for exploring.

There are no direct flights from Aberdeen, so flying via London or Amsterdam may be quickest. Even then, many flights make one or more stops en route, so compare flight times carefully. Ryanair, Easyjet, Royal Air Maroc and many others offer flights from London, with timings under four hours.