It is an accepted fact of life that women like to put their own unique stamp on things, so it should be no surprise that one very clever woman has taken a traditionally male pastime and turned it into a proper girlie aff air. Mhairi Morris of JOMM Events discovered a gap in the shooting market and suddenly Scotland’s fi rst ladies shooting club was born, aptly named Glad Rags and Cartridge Bags.

The Glad Rags girls held their fi rst organised clay pigeon shoot in late 2014 and already there are waiting lists for upcoming events. Needless to say, I was excited when invited to partake in their second shoot at the stunning Raemoir House Hotel.

Upon arrival, I was greeted with a warm breakfast and an even warmer reception, and made to feel very welcome despite having never held a gun before. After being divided into groups based on ability, I and my fellow ‘Ducks’ followed our instructor Richard out to the fi rst trap where we were given a full briefi ng and shown how to handle the semi-automatic Beretta shotguns, designed specifi cally for ladies.

Under Richard’s gentle but informed tutelage, I eventually discovered that the secret to shooting success, apart from keeping both eyes open, is letting the world slip away until there is nothing left but the ‘bird’ and you. Once you fi nd that place, the clay pigeons literally start to explode out of the sky, and that is a feeling that you have to experience to appreciate.

Aside from the relaxed camaraderie that often characterises ladies- only events, I was also struck by the power of an occasion like this to bring together such a diverse group of women. Though there were some rather enviable tweed jackets on show, the real focus here is on shooting and socialising.

As if the shooting is not reward enough, the day ends with lunch and a prize giving during which the most accomplished in the group receive gifts from sponsors like Orvis and Cairngorm Sporting Supplies. A day out with Glad Rags is a day you will long remember. 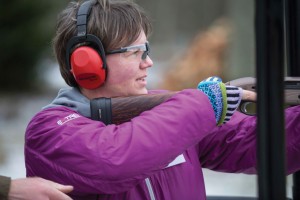 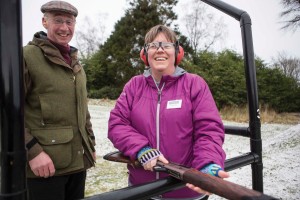