There are few feelings as satisfying as picking up the keys to a new home, but bagging a bargain comes fairly close.

‘For those in Aberdeen upgrading to a family home in a desirable area of the city, there is a once in a lifetime opportunity to save several thousand pounds in the moving process’, advises residential property expert Nicola Reid.

There are significant savings to be made prior to the UK Government’s Stamp Duty Land Tax (SDLT) being replaced by the Scottish Government administered Land and Buildings Transaction Tax (LBTT) on April 1st 2015.

‘If people have been thinking about moving, the first quarter of 2015 really is the time to make those fi nal decisions and put pen to paper to receive your keys. We have the expertise in place to ensure buyers use this window of opportunity to their financial advantage.

‘A property rush has begun, particularly in higher price brackets, where the biggest savings are available. There are financial tipping points, where in certain cases LBTT will cost 10 percent of the purchase price instead of the current five per cent under the current SDLT.

‘As a guide, a purchase of a £350,000 home before April will incur a charge of £7,500 in SDLT, but when the replacement LBTT comes in after April that fee will rise to £8,350. Savings for higher end properties will reach tens of thousands.‘

Nicola became a partner at Ledingham Chalmers last year while still in her 30s, and works side by side with
department head Mike Cunningham. For the last two years she has taught the conveyancing module for the Diploma in Legal Practice at the University of Aberdeen, where she once studied.

‘I feel it is important to pass on this knowledge. The course prepares students for the practicalities of legal practice, a particularly vital step as they apply for traineeships with fi rms. These skills are valued in our department.

‘We have the experience of dealing with people who are making the most important decisions of their lives. Face to face reassurance and being able to separate the emotional from the fiscal or legal are vital when buying or selling property.

‘The first months of the year are typically busy, as people tend to re-evaluate their circumstances in many areas of life from New Year onwards. As the market picks up in 2015 numbers of enquiries have been higher than we’ve seen for considerable time. I would advise prospective buyers to act sooner rather than later, so their deals can be completed by the impending cut-off date.’ 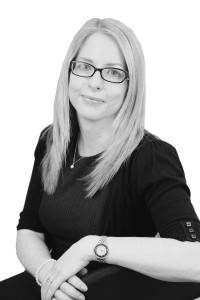